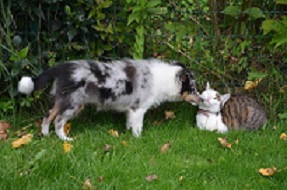 Most pet owners are at least somewhat familiar with heartworm disease and how it is spread and prevented. However, there is still a lot of misunderstanding about which animals are at risk and what is necessary to protect them. This blog post is the first in a 3 part series detailing what heartworm disease is, how to prevent it and how it is treated.

Heartworms are a foot long roundworm species (dirofilaria immitis) that is passed in a microscopic form (called microfilaria) by mosquitos. Heartworms can infect dogs, cats, ferrets, coyotes, foxes and other mammals (in rare instances, even humans). In dogs they develop into a spaghetti type worm that lives in the heart, lungs and associated blood vessels. Dogs can be infected with heartworm and spread the disease through mosquitoes for quite some time before showing any symptoms. Heartworm in dogs causes lung disease, heart failure and damage to other organs. Symptoms in dogs can include coughing, lethargy/fatigue, anorexia, weight loss, breathing difficulties, collapse and death. However it is important to know that dogs can be heartworm positive and not show any symptoms for at least a year after infection.

Heartworm disease in cats is very different as they are not a natural host like dogs are. Cats typically develop 1-3 worms or may have no adult worms. Even immature worms can cause serious problems in cats. Cats with heartworm disease may have symptoms of respiratory illness, vomiting, weight loss and decreased energy. Tragically, one symptom can be sudden death without any prior signs. Heartworm disease in cats is not easy to diagnose or distinguish from other diseases. There is not a reliable test that will definitely diagnose feline heartworm disease. A combination of positive tests involving different diagnostic methods and ruling out other disease processes is needed, however a definitive diagnosis cannot typically be made without necropsy. This means that feline heartworm disease is likely under reported. To complicate matters further, there is no approved drug therapy for cats and treatment can be difficult, frustrating and risky.

Heartworm is a serious and potentially fatal disease that is easily prevented but difficult, expensive and challenging to treat. In cats the rate of infection is quite a bit lower than it is in dogs, however indoor cats have been shown to be just as likely as outdoor cats to become infected.

Heartworm disease is more prevalent in southern states, however has been reported in all 50 states. Heartworm disease is increasing in many areas, including the Midwest by as much as 24%. Climate change and milder winters along with increased relocation of dogs from down south by humane societies and rescues are contributing factors. Many southern dogs have been displaced by hurricanes and natural disasters and are often transported to the Midwest for a better chance of adoption. It is estimated that 250,000 pets have been relocated to other parts of the U.S by hurricane Katrina alone.

Because heartworm infection does not show in the heartworm blood test in dogs until 6 months after infection, testing dogs before transport is not always effective. If the dog was bitten by an infected mosquito within 6 months of the test, it will not be detected and can then be spread by mosquitoes in the state they are transported to. Dogs in early stages of heartworm infection or with milder worm burdens often do not show any symptoms.