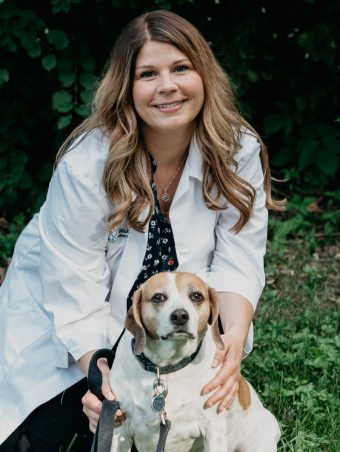 Dr. Jackie grew up in a small town in Wisconsin called North Cape, located in Racine County.  Her family lived next to a horse farm which helped to spark an obsession with horses in Dr. Jackie as a young girl. She eventually                           took lessons and even showed horses.

Living the rural life, there was never a shortage of barn cats. One kitty that stands out in her memory was a spirited Torti, Funny Face. She lived to be over twenty years old, but due to her repeated forays up onto the garage roof, she definitely used up every one of her nine lives!

Dr. Jackie also spent much of her free time rescuing injured animals and nursing them back to health. She remembers bottle feeding the baby bunnies and mice that the barn cats brought in. Unfortunately, a few of her patients got loose in the house, but at least they were healed!

Once she had been practicing for several years, Dr. Jackie started to see ways in which she could shape the practice, and so she started learning all she could in order to one day take over as owner. On January 1st, 2016, she and her husband, Brian took ownership of Waukesha Animal Hospital. Over time, Dr. Jackie has many plans for the practice. One of her goals is to continue to incorporate more alternative therapy. She recently introduced natural nutritional supplements and laser therapy. She is also working on making the clinic a fear free clinic, in addition to our certification as a Feline Friendly clinic, and our long and proud history as one of the first American Animal Hospital Association (AAHA) clinics in the state of Wisconsin. Some of her future plans include potentially adding ultrasound services.

She loves being a vet because every day is an adventure. She enjoys getting new puppies and kittens off to a good start, helping sick or injured pets, and helping owners take the best care of their pets possible throughout their lives.

Recently Dr. Jackie, Brian, and their two young daughters, Alayna and Harper, had to say goodbye to their dear, much loved, Lab mix, Gibson. Gibby, as we liked to call him, spent most of his time here at the clinic, lying next to Dr. Jackie’s desk. The family also includes a sweet kitty named Herman who Dr. Jackie has had since vet school. Herman loves napping in the sunshine, and snuggling with Harper.

When Dr. Jackie and Brian aren’t at the clinic fixing something, or doing paperwork (owning a clinic is much like having a problem child – there is always something that needs to be taken care of), they love spending time outdoors with their children, playing, biking, swimming, visiting the zoo or camping. Dr. Jackie also enjoys baking. When time permits, she loves to read or go to the movies.