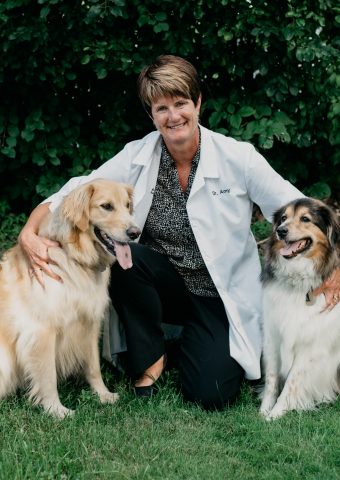 Graduated from Purdue University in 1987

Dr. Amy was born in Pennsylvania, lived briefly in West Virginia, and moved to Beloit, Wisconsin when she was just five years old. Her family got a kitten a year later and Dr. Amy remembers bringing the kitten home and racing it to the other end of the house, assuming she would win, but she was wrong! That cat lived to be 20 years old. They got a springer spaniel during her high school years, and the cat bossed the dog around, as most cats do! Summers were spent on Upper Nashotah Lake in Oconomowoc, where she developed a love of the water. Some summers a pseudo veterinary hospital was created, in which Dr. Amy tried to save fish hit by boats, turtles that had been injured by racoons, or birds that had been caught by cats.

Combining her interest in medicine with her love of animals, Dr. Amy worked in veterinary hospitals in Beloit, Clinton, and Watertown during her high school and college years. She went on to earn both her Bachelor of Science and her DVM degrees at Purdue University. She did her senior internship at Waukesha Small Animal Hospital, and after graduating in 1987 she joined the staff full-time, becoming only the second female doctor in the practice’s history. Several new clients came in specifically seeking a female doctor. How times have changed, as now we have been an all-female practice since 1998!

Through her 30 years of experience, she has found how much she enjoys the challenge of working through a medical problem, making a diagnosis, and treating a condition that will hopefully improve the quality of life for a pet and their family. The most rewarding part of her job is forming long-lasting relationships with her clients. She treasures having known some families through three generations of pet lovers and their furry companions.

Dr. Amy and her husband, Jeff, have two grown children, Alex and Lauren, both who live out-of-state. Being an outdoor family, Dr. Amy enjoys kayaking, hiking, and gardening. She especially loves hiking with her kids when visiting them in Michigan and Oregon, although they do challenge her endurance at times!

Throughout the years they have had a variety of pets including guinea pigs, beta fish and rats. Yes, believe it or not, rats make great pets! Currently they share their home with Kenya, a Border Collie mix, and Lexi, a Golden Retriever.

Kenya was adopted from the Wisconsin Humane Society in 2007, and is originally from Kentucky. She’s a sweet, low-maintenance girl, although in her younger years she would take any chance she could get to escape and explore!

Lexi is their goof ball. She is a bit of a spaz, but is just so lovable with personality plus. A favorite pastime is to do her cat imitation and pounce on any light reflection on the wall or floor. She is very entertaining. Dr. Amy wishes she had Lexi’s energy! Just like any golden, there is no such thing as too much attention.