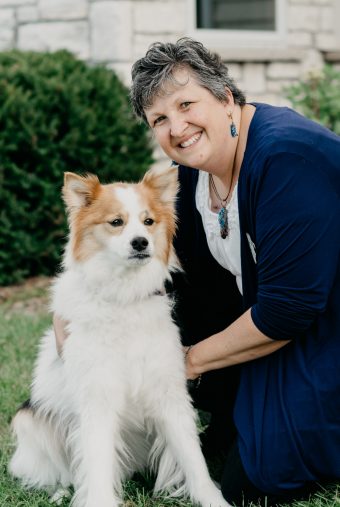 Dody grew up in Bay View, Milwaukee, Wisconsin. She always had a love for animals and considered a career involving animals when she was young. During high school and college, she volunteered at a wildlife rehabilitation clinic and eventually became a state and federally licensed wildlife rehabilitator. Dody found herself doing everything from splinting wings on song birds, to bottle feeding baby bunnies, to tube feeding sea gulls. Soon she had a “clinic” set up in her house. Luckily her dog Duffy seemed to take the many birds, bunnies, squirrels and other animals that made their way through the house in stride. Duffy even took a parental role with the three baby raccoons that spent their first months with the family, letting them eat out of his dish and leading them single file around the fenced in yard.
Her career goals changed when she married her high school sweetheart of seven years, Jim, once he completed his education and started his career as a licensed Architect and Builder. They bought a house and started a family. Dody went to work at the VA Medical Center in Milwaukee as a medical secretary. After the family grew to three children under the age of three (a two-year-old and twin infants), Dody left that job to be a mom full-time. When their oldest, Emily was five, and Evan and Geoffrey were three, the family moved out to Merton, and have been residents of Lake Country ever since. Over the years they had another family dog, Winnie, and several birds, including a parakeet, dove, two cockatiels, and a parrot.

Once the children were mostly grown, Dody was excited to jump back into the workforce and join the clinic in 2008. Now that she is back working with animals, she feels like she’s come full circle. In addition to duties as a Customer Service Representative at Waukesha Animal Hospital, she is also a published author.

Jim and Dody enjoy hiking, traveling, and sailing. They still have one son at home, who helps to care for their crazy, mixed breed allergy dog, Luna, as well as several chickens.